The Spooner and Shell Lake Fishing Clubs were very disappointed when the Wisconsin Interscholastic Fishing Association (WIFA) had to cancel the February 15 state competition at Eagle River because of poor ice conditions. I’m not sure if that was just about the competition. Losing an overnight trip and getting a Friday off school may have factored into their disappointment.mber to determine how big it was when it was released into the wild.

All was not a total loss, however. Help arrived on a donkey. A Fish Donkey to be specific. This increasingly popular phone app makes it possible to hold fishing tournaments of all kinds anywhere. The event was restructured to allow teams to fish anywhere in the state. Basically, you just register for a tournament on the app and then during designated tournament hours take pictures of the captured fish on a measuring board. You can also take pictures of the angler with the fish and do videos of the fish being released. Then hit the submit button and the fish is entered into the contest.

Entry photos are also saved on your phone. Supposedly the lengths by species are tallied almost instantly so you can check how you’re doing in real-time during the event. The app can eliminate the long wait for final results where paper entries have to be tallied.

The Fish Donkey App seemed so simple I kicked myself for not thinking of it first. Technically you could cheat by entering the same fish multiple times but WIFA has always depended on the team coaches to report fish honestly, in any case.

Most students made other plans for the day after the tournament was canceled. Eight students total from both schools were able to make the rescheduled event we held on Lipsett Lake. A team could be as many as 12 students so to be more competitive we competed as a combined team of both schools. The fish were biting and we racked up about as many points as possible on northern pike to 30 inches, bluegills over 8 inches and did decent with largemouth bass. Unfortunately, we just couldn’t come up with any perch, crappie or walleye which hurt our point total. We ranked 31st of 52 teams.

Like most apps, Fish Donkey had some glitches. Turns out phones don’t work well in the cold. Even fully charged, phones would shut off after sending in a couple of entries and would have to be warmed up while the catches piled up. Also, viewfinders would fog up. You couldn’t see if you got the whole fish on the measuring board to show the length. Not sure if the picture quality was the problem but it took two days for rankings to be posted instead of 3 or 4 hours when results were hand tallied from paper sheets.

Well, at least it worked better than the Iowa app.

Get a Free FISH Membership 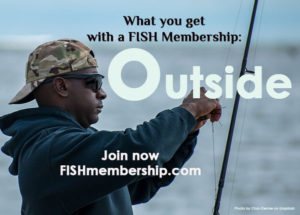 Get your own Membership and get a free one for a friend.

Sign up for our emails and learn about FISH

You really need to do this because there's a lot to learn and we're really interesting.