How Do The Fish Get Here? 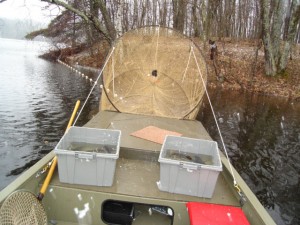 All of the fish hatched and reared at the Gov. Thompson Hatchery come from outlying hatchery ponds. Mature fish are captured in fyke nets during spring spawning runs in northern Wisconsin lakes and rivers. After the adult fish are removed from the nets, their abdomens are gently rubbed to expel eggs or milt (sperm) which are mixed together in a spawning pan. The egg-taking procedure does not harm the adult fish and they are returned to the wild.

After the eggs are collected, they are placed into hatching jars where a specific water temperature is maintained to control their embryonic development. The hatchery can utilize up to 1,146 jars, each capable of holding up to 3.5 quarts of eggs. In the wild, less than 0.1% of the eggs deposited by females hatch, compared to 60 to 95% taken to the hatchery.

What do they eat?

Fish need enough food of the right size when transferred to rearing ponds either as fry or fingerlings. Prior to the eggs hatching, ponds are fertilized with organic fertilizers like alfalfa meal to grow phytoplankton (microscopic plants). Zooplankton (microscopic animals) eat the phytoplankton and reproduce rapidly providing a food base for young fish, both forage and production.

Each year 4 to 6 million sucker fry nourish the growing musky and northern pike fingerlings. In addition, another 10 to 15 million sucker fry are stocked in their own ponds, reared to a larger size and subsequently fed to larger muskellunge, northern pike and walleye fingerlings. As the supply of suckers is nearly exhausted, the hatchery’s production fish are switched to a diet of fathead and shiner minnows. Each rearing season about 50 to 60 tons of 1/2″ to 3″ minnows are obtained from nearby lakes and ponds and from commercial bait dealers. Once started on minnow diets, the fish will grow about 1″ per week throughout the summer. This combination and sequence of plankton, sucker fry and minnows are essential to raise young fish to a larger size so they’re ready to be stocked

From Rearing Ponds to Final Destination 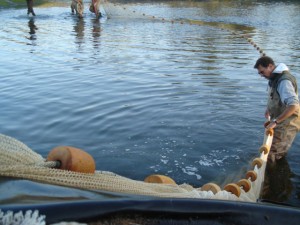 The outdoor rearing facility consists of six half-acre and 40 one-acre ponds. Muskies are raised in about ten of these ponds from June to October. When 6 to 12 inches long they are stocked in public waters. Walleye, northern pike and forage fish are reared in the remaining ponds. Most of the walleye get stocked in June and July prior to being converted to a forage diet, while a few are kept and continue to be fed minnows until October. In addition, some northern pike are fed minnows and are stocked out in June and July. Approximately eight additional ponds are also leased and managed in outlying areas where white suckers and fathead minnows are raised to supplement the hatchery’s production.

When the fish are ready to be stocked out, the rearing ponds are drawn down to concentrate the fingerlings either into deeper areas of the ponds or into “catch-kettles” where they can be netted or dipped out. In either case, the fish are weight-counted and loaded onto tank trucks to transport them to their final destinations. Transport trucks have oxygen cylinders that supply oxygen to the fingerlings during their ride.

Where do they go?

While the majority of walleyes produced at this facility are stocked in northern Wisconsin, the muskies and northerns are widely distributed from the north to south in the state.

Read recents posts on our blog

Sign up for our emails and learn about FISH